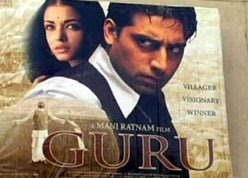 Just watched "GURU"....Boy what a way to begin this year of watching movies!!
If it's Mani Ratnam, it has to be good! And Guru reconfirms this popular belief. Perhaps it's as close to perfect as anyone can get. But folks, if the director is worthy of such acclaim, the actor deserves no less appreciation.
Whether the narration or presentation, the script or dialogue, the cinematography or choreography and mainly the lyrics or music, Guru fails nowhere, absolutely nowhere!
Guru unfolds with the story of a simple young villager, who has the nerve to fly high and the vision to grow. Grow bigger than life itself. Most of us fail to do this(atleast me!!!)
The film is anchored by Abhishek Bachchan's remarkable performance. Whether it's his not-at-all glamorous looks or his far-from-funky accent, the actor has completely into his character. His brilliant performance has proved that he has outgrown from the shadow of papa Bachchan to mark his own existence. AB Baby is indeed a complete treat!
Although Aishwarya Rai doesn't have too big a role to play, she has skilfully displayed the 'strong wife' persona.
One person who despite her 2-minute show rocked the theatre is Mallika Sherawat. The Maiya Maiya number sees Sherawat swing to the tune and you end up applauding the choreography, the music and the performer too! Her appearance will definitely hold your attention.
While the music is very A R Rehman - foot-tapping and melodic, the lyrics prove that they're the work of a creative mind, Gulzaar.
An absolute must watch people......
Posted by Life Rocks!!! at 11:34 AM