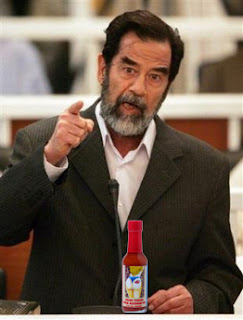 Suddenly a lot of buzz on the judicial forefront.Saddam Hussain to be hanged in 30 days. Manu Sharma to be jailed for life. I have really not thougth about it but this certain reader's poll as to whether Saddam should be hanged or not made me put on my thinking cap (had to brush aside a lot of dust from it that had settled since some time).
Following my trail of thoughts, I am really not for capital punishment.Doesn't depend on the degree of crime at all too. Life I believe is given by The Al Mighty. Are we really worth making a decision to take away what he has given?
History is evidence enough. Valmiki who was a robber repented his acts and went on to write the Ramayana. King Ashoka who brutally murdered so many at war turned a new leaf and is still Ashoka the Great to us.
Life imprisonment...well ok but death??? Even if that person does one good deed in the remaining of his life spared isn't it worth keeping him alive? Don't know....Could bring other difficulties as kidnaps for release etc but somehow my heart votes out Capital Punishment.
Posted by Life Rocks!!! at 6:17 PM

Well.. U r right . No one has the right to take life if he can't give life. Death Punishment is wrong. even the worst criminal shud be given one last chance to change. but in Saddam's case, it's different. There are more 'nasty American ideas' behind it than a death punishment... we know that. but threats can only create more rebels than slaves...i learned that from history so.. :) wot say?

i was in kuwait when iraq had invaded it.. and the iraq-kuwait war did change our lives big time. that man there didnt have a right/ reason to play around with innocent peoples' lives.

we, indians, who had to run for our lives - had to first go to iraq then be flown to jordan n then to india. and in iraq - life wasnt any simple either... girls being raped by iraqi soldiers, and being sold off to them so that their families could be given escape from the country - every hour/ day...
it wasn't funny n easy for sure. we, had no reason to have lost everything there..

i, at the age of 9, have counted military tankers upto 150 crossing a road near my house; have seen bomb blasts, and dead bodies of soldiers who go without eating n drinking for days!

why wudnt saddam hussain have earned himself capital punishment ya?