Nightlife in Bangalore and New Year

I went for a movie on Christmas night along with my friends to Innovative Complex in Marthahalli. this is a half an hour drive away from the place I live. Now let's get more specific, this was a group of 6 guys and me one girl (yeah yeah...I just land up with guys as friends most times). Now on a general note this should have been great for me, any girl's dream, 6 guys and just me. Well, it was. It's nice to be pampered at times. But there were some instances that disturbed me. 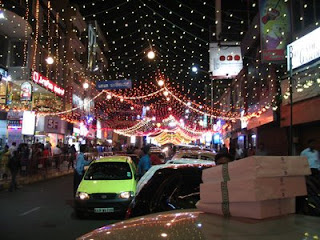 After the show, when I stood on the road at 10.30pm I had this creepy feeling in me. I felt as insecure as I feel in Kerala even at 7pm. I knocked my head a couple of times saying"Chill girl..this is the IT hub of India!!" But the knocks didn't help! On the way back home, even the cops gave this kind of suspicious look that degrades you at any point in the day!

I wonder what's wrong with the city. Is nightlife all about call centers, pubs, drunken driving and X rated stuff??? There are loads of stuff I would love to do at night. It would be nice to take a walk on the road, a drive to coffee day on a day of tension, or watch a late night show!! The morale traffic police can do their job. I have no issues against them. But they have no right to go overboard by shouting at people having a juice at the juice shop or sometimes even rushing to take a late flight!! Spare us!!!
What's the use of complaining to extend the deadline on New Year's eve to 1am when we have way to go on a normal day too...Bangalore has miles to go before being truly metropolitan!!
Posted by Life Rocks!!! at 2:54 PM

The picture brought in nostalgic memories of Bangalore. But the post really made it gut wrenching. There was a time not long ago where the night walks was something that was so nice in the city. Bracing the chill for a cofee / ice cream used to be so much fun ! Sad !

But, hey, you have a great time in the new year !

All the very best !

Night life's are no more there in Bangalore.....
People have spoiled it...There are not many law abiding citizens in Bangalore so obviously night life's just dead..Nothing can be done abt that..

I think if the police were law abiding Indian citizens ... and mature..something could be done.