Bangalore saw the release of Sivaji- The Boss on Friday and that was huge. I have been here in Bangalore for 2 years now and have not seen anything like this before…I have seen PVR in all states, but never like this.

Police were all over controlling the mob and keeping a check on the fans that poured in from god knows where to book tickets. There was despair and anxiety on the face of many as to when they would get tickets. The corporate companies like Cognizant, have booked entire show for their employees (unfortunately not my company). 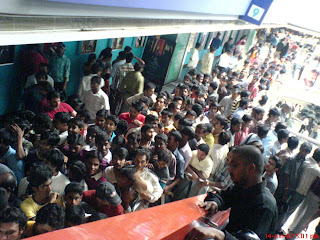 The small theatre near my home had people sleeping on the road the previous night to get tickets. I was simply amazed. There was a theatre where they did the "Paal- Abhishekam" before the release.No other country other than India can show such extremes of fan following! I salute all those crazy fans of “Thalayver” out there!!! 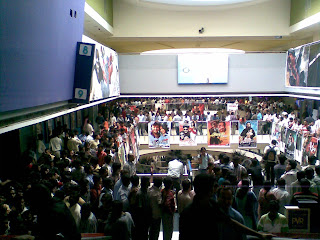 I am not looking to see the movie till a few weeks..I guess I’ll give way to all those hard core fans first…Would surely watch it sometime...Love to see whether it is worth all the ga-ga. Anyone seen the movie yet? Please tell me. Meanwhile let me call the movie Sivaji- The crowd puller!
Posted by Life Rocks!!! at 9:56 AM

I do want to see the muvee! Altho im not that crazy! :D
I will wait for a couple of weeks!
the last time i went to book tickets for baba in urvashi theatre i came home disappointed and beaten!
yeah! I got beaten then police during lathi charge! :D so Im not goin to see this muvee so soon this time! :D

Hey Anu.. Shift to CTS soon.. so that u can turn lucky for the next movie atleast.

Hey Vidya.. Sorry for the typo misatke earlier. Shift to CTS soon.. so that u will be lucky atleast for the next movie.

Ha ha...now I know...there are people who could be there in that crowd!! Right, Rajeev? There was lathi charge that day too...Sad you missed it!!

i have heard of the 'mass hysteria' everytime a rajni movie comes out...but havnt really witnessed it first hand, nor seen any movie of his. the language being a major hurdle ofcourse.

just the other day on a news channel they had selected 3 rajni fans to 'imitate' him. his extravagant gestures n evrythn....i wonder what ppl find so awesome in that. i find it a bit silly honestly...

but i guess i shouldnt pass comments without really knowing wat he says with the flick of his glares n stuff!

I have seen the movie. A typical Rajani film. Worth to watch once. I always like the style of Rajni. In this film the way he put bubble gum in mouth is fantastic. He is the one and only star who can create such a huge opening for an average film. The songs are superb and after a long time AR Rehman got his magical touch back. and sankar picturised the songs in a perfect way.
But if u go for the film with high expectation, u will be disappointed.
Oh yeah, last but not least Nayan tara is there in one song and the heroine Sriya is sooooooooooooo hot.

My friend was madly searchin for it in London and went spending thousands of rupees.He taught me the dialogue,Hwzthat.book a ticket for mee too ,next week

heehaw , was waiting for someone to comment on that movie!I heard there was a software firm in chennai that superimposed an american's skin color on the sooperstar for 30,000 odd frames!And i have heard the oru koodai sunlight song ! :)

He is God. Boss. Big Boss ! And he is much bigger in real life than in reel life. And when the two meet..well, thats an awesome combo. Isnt it ?

I didn't get tickets either! totally desp about that! :(
oh well, here's to hoping!

ha ha. I am not the only one who hasnt watched the movie yet !

looks like there are a whole bunch of people waiting for various reasons.