One of the most talked about women today is Aishwarya Rai and then Sunita Williams. Of late Ash seems to be busy honeymooning! I was not very keen on looking beyond my small earth till lately. Sunita Williams and her Atlantis journey inspired me to do so.

Following the Kalpana Chawla tragedy I really hoped that would not repeat in the history of Indian women. The news channels covered the landing by the second and there were millions who took a breath of relief after the safe landing. As the “Times of India” stated it was reality TV at its best for those few hours. There were people who performed pujas too for her safety. 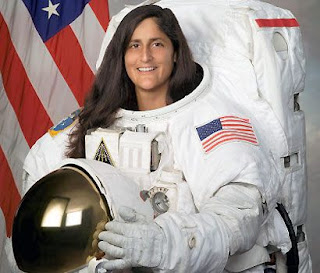 Yes she did make India proud.But I wonder….does India really have a share in her feat. She was born in Ohio and the Indian connection is her father who hails from Gujarat. There ends all Indian roots. I mean what was all that media hype for (I know it’s hyped for just about anything). There were SMS campaigns, calls for wishes…Come on give me a break…Isn’t it over done a bit???

yup,definitely over done!!But I guess that's Indian Journalism for u,they've nothing better to do than sensationalise things like now I believe they're on the lookout for the tree that Aishwarya Rai supposedly got married to before Abhishek,is that crazy or what??Oh yeah,GOLD!

The lady has guts. She has a marvelous achievement under her now.

But that doesnt take away the fact that Indian news channels are just dry of news !

Sunita's mom is from some part of Yugoslavia. There wasnt even a murmu there, we are told ! Huh !

Yah defntly I admire her..but all this India media hype is nthg more than a crap. Its all done for for self interest.

I cant agree with you more.. same thoughts.. ditto!