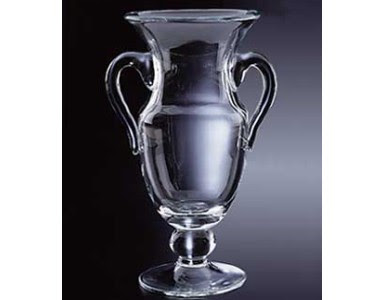 The empty glass vase is a wonder on itself.
The onlooker looks at it. The design so perfect, the curvature so smooth. He admires the artist who molded it with his hands. He looks through the glass vase and sees the other side of the world. It seems as if the vase knows no foul. It is crystal clear in its path. He awes at its pureness. It looks as if this is a masterpiece of The creator.
But the vase believes itself another entity, one that no one else understands. It encompasses within itself a space that no one sees, a hollow that no one penetrates, an emptiness that pains it. It longs for a fullness that completes it. The vase knows that its life is only by chance. It knows that a small shrill could shatter it to a thousand pieces. It knows that a small mistake- intentional or unintentional may reduce it back to its original state. The vase waits- with fear of the end rather than the pleasure of life.
Posted by Life Rocks!!! at 12:32 PM

May be the vase needs some flowers to fill the hollow....

wow! this is such a beautiful entry.. what inspired you?