The Sea and Me! 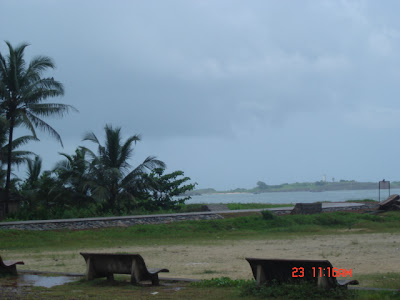 I had a rocking weekend. We had a trip to the Paradise Isle Beach Resort at Malpe from office. It’s been years I haven’t been to the beach so the trip brought back a lot of childhood memories. On Sunday morning when the team was fast asleep due to late night disco, cricket match etc I woke up early to watch the sunrise at the beach. As I sat there and looked at the sea, there was a tide of thoughts through my mind.

The sea is something that brings mixed emotions to mind. The waves of Malpe beach were strong and violent. The tide had covered much a distance since the afternoon on Saturday. It looked as if the tide wanted to disturb the peace at the shore. Each time the shore wanted to settle down the waves soared against it. It does not understand that the shore needs time to settle. It just pushes the shore further in. If action could not hurt much, the waves even roared to seal the cruelty.It tried to put the fishermen in danger with the turbulent turns. 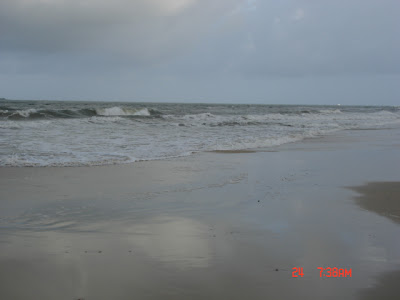 But then when I looked at the waves again and thought of the past day, there was a lot of happiness that flooded me. Now I looked at the sea with another angle. The sea brought a lot of hope. The shore even when hit continuously by the waves toiled against it. It seems to be mocking the waves that its hits will not break it. There is a lot of hope in the minds of the people who are at the shore. The lovers who walked silently on the shore, the fishing folks whose day depended on their catch, the joggers who hoped to lose weight, the elderly ones who hoped to live longer and healthy. That thought really put a smile on my face and I walked back happy!
Posted by Life Rocks!!! at 12:37 PM

Oh wow, malpe beach!!! this beach hold real special memories for me.Every summer holidays all of us cousins would make a trip from all over to our granny's place near udupi...n' the highlight of the visit used to be the trip to malpe beach...those were the days...unlimited laughter n' absolutely no worries:)

Thanx for the superb write up...brought back gr8 memories.

you are so right about the mixed emotions the sea brings. i think that't one of the few places that can make me feel happy and sad at the same time!

A beach is a wonderful place to unwind. Luckily I live near the 2nd longest in the world!

Nice post.It brought back a lot of memories.Congrats on the hundreth post!

now ur blog and mine look like siblings :D i am the fatter one, though, cuz of three columns!