Over the past few days there was a lot of buzz about the Sethusamudram Shipping Canal Project especially when Karunanidhi went ahead and said, “Who is this Ram? From which engineering college did he get the engineering degree? Where is the proof that the bridge was built by him?” Wow! Now that’s what I call real cheeks of the guy!

If I would still be back in college, I am sure we would have a complete analysis on this case. The political, environment, economic, religious impact and so on….But hey I’m long past those hectic days. 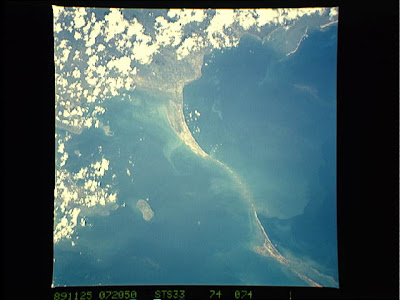 I was thinking on what I believe. I mean, Yes! I do believe in Lord Ram. I am no atheist. But I am a factualist as well. Archeology proves that this bridge is about 3,500 years old. And as per the Vedas Ram lived in the Treta Yuga that is calculated to be 1.7 million years ago. But I definitely don’t think there was human population that long ago! Now who is wrong? No idea!!

There is a lot of proof that this bridge often called the Rama’s bridge or even Adam’s bridge (don’t ask me why!) could not be a natural phenomenon. It seems some reefs here are so light and that’s why they float on water.

Now I seriously would like to believe that this was the one the Vanara Sena built for Sri Ram. It really nourishes my faith in the myth. But could it really be true?

Ram or no Ram, that bugger needn't have said it out loud. Atleast he cud saved all those buses that burned in blore.