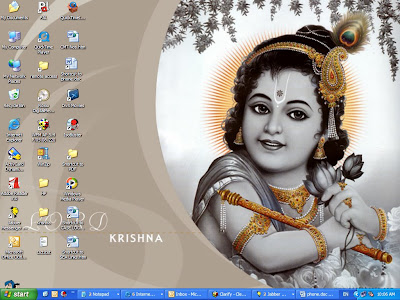 I wanted to take up this tag to share something special in my life. Well not the desktop, actually. This has been my desktop appearance for quite some time now. It does change occasionally but always to a Krishna photo. This adoration towards Krishna is something I share since a long time and that traces back to the time when "Mahabharath" serial was aired.

During that time we were in Muscat and those were the days where cable TV was non existent. Once in a month the 4 episodes shown that week on TV used to be made cassette and released in the video shops. We caught up with the craze quite late so did manage to see most of the videos toegther.

How much I used to enjoy them!! The attraction was that Lord Krishna was never perfect. He was naughty, he was cunning, he was deceptive and still God! Whenever I used to get naughty I used to pray to him to forgive me. Later on in life this continued. There would always be a Krishna Idol or photo somewhere in my room, definite.

aha! teaming up with god for all the naughtiness eh? :)

Me too like Krishna exactly for the same reason. He is not perfect, just one among us :)

Now i know the secret of "Kannan"

Vidya... u made me nostalgic.. Thinking my own school days when sunday morning was booked for this...