The dark hands of the Law

I know Manju did cause a stir among all of us through her consumer case…We pulled her leg big time when we all met up last weekend. But jokes apart I seriously wished all this would turn out well for her. Was also a bit concerned as she was off to a place where she doesn’t know the language too. I hoped for the best…

Talking of the issue for 2 weeks we really hoped all will be well..But little did we all realise that these are the ways of the law. Manju and a friend of mine Surendar ( Suri who knows kannada) went to this so called consumer court. Outcome of the trip in one word……Sunny Deol’s famous dialogue in movie Damini……”Thareeq” (or date for those who don’t follow Hindi)

It seems will now notify the company of the issue, the company hires a lawyer and then they continue on another date. When Suri tried to ask one of the lawyers there about the process he confirmed that all they would get is thareeq. He showed with examples right there in the court. There were people who asked for dates because there was a wedding in the family, or they were going out of station, or unwell etc etc….

As Manju observed all the people in the court were senior citizens…I guess these people filed their cases when they were as young as Manju…..LOL.....So incase she wants a ruling on this case…she sure has a long way to go…All the best!!! 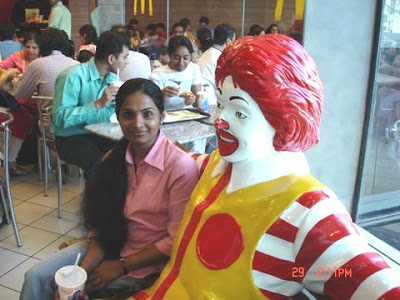 Meanwhile here is a snap of hers in one of those happy moments that is before she gets old waiting for her court decision….
Better stop now before she kills me for all this free publicity!!!
Posted by Life Rocks!!! at 10:41 AM