When the mind is in turmoil and you feel that there seems nothing that is going right, I always find solaec at a temple. Not one of those kinds who go to the temple every week or go there to find God. I just go when I feel the need to relive myself.
One place I love in Bangalore is the Shiva Temple on Airport Road behind Kemp Fort. A huge statue of Shiva in yoga posture, the biggest in the world..... mesmerising anyone at all. This is one place that I had seen in a lot of photograhps and movies but it took a year in Bangalore for me to go there. 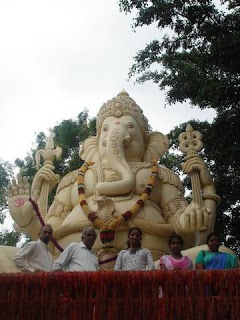 I was really amazed to see this place nicely tuckd away at the back of a heavy traffic Airport Road and that too at the back of Kemp Fort!! Later discovered that it was built by the owners of the place.

The entrance has a statue of Lord Ganesh and then Lord Shiva. Here we see Lord Shiva in the Padmasana pose with Ganga flowing from the knot in his hair. Behind the idol there is the holy cave and within the cave are twelve beautifully decorated Shiv Lingas. The best is the one made of ice that doesn't melt. 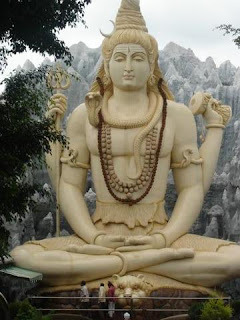 In front of the idol is a small wishing pond where you drop a coin and make a wish. No prizes for what I wished!! The entire place is so serene with the Om Nama Shivaya mantra recited repeatedly that really does lift you above.
The idol can be viewed best from inside Kemp Fort. So even though you are not going to visit the Kailas...this is one place you can be to!
Posted by Life Rocks!!! at 10:17 AM