There are times when silence speaks volumes. One such instance is the movie Mozhi that I watched lately! Was pretty much used to the routine Tamil Films of late…After the disaster of watching some with almost the same story line, same action and definitely almost sounding alike songs for sure, I thought I would not be watching any Tamil movies for some time.

But yet again the trailer mania struck. Saw the songs of this movie and fell in love with it. After so long there were some songs that didn’t have the same beats and had some meaningful lyrics without English words….My! An achievement for Tamil movies considering the present scenario…Hats Off to Vidyasagar for that!! Even though one song was a lift from his own Malayalam compositions.. 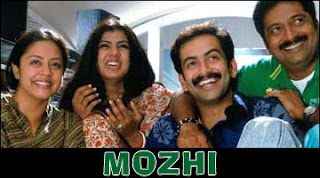 The performances are amazing. Jyothika speaks with her eyes with no words at all. She has really evolved as an actress. Prakash Raj is a natural as usual. He carries off the seriousness and humour so easily! All the characters of the movie including Prithvi Raj are so apt and so in control…Not a bit of overaction and underaction too…And most important none of those filler comedians. The humour is so in built…

Storyline…ok let’s be frank…not all that a new concept or anything but dealt with in a different way. As the movie is about the silence of a girl the movie attempts to talk about emotions literally. The characters actually talk out what they feel, why they behave so etc…Hmm…Wonder how many of us can explain why we behave certainly in situations!!
But all in all…definitely a good movie and worth a watch…so I guess that sums up to highly recommended.
Posted by Life Rocks!!! at 1:30 PM